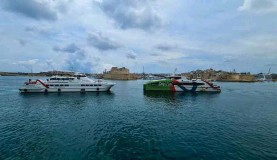 The CEO of the Gozo Business Chamber, Daniel Borg, has hit out at the development of what he described as being almost a monopoly by the two operators of the Gozo fast ferry service after they reached an agreement to operate an identical timetable which is severely reduced than when the service launched a year ago. Borg was addressing MPs on the fast ferry service in Parliament’s Gozo Affairs Committee on Monday when he passed his critique on the service. Borg said that while the fast ferry was a “game-changer” for Gozo upon its launch on 1 June 2021, the service has slowed down and subsequently deteriorated over the past few months. In a presentation to MPs, Borg highlighted how the number of trips between the two islands had decreased from 18 every weekday in June 2021 to 10 trips every weekday this month. The decrease is even greater over the weekend, going from 22 trips in any given Saturday or Sunday as per the first timetables released in June 2021, to 10 trips during this month. He also lamented how the service had been de-integrated from the Tal-Linja card in recent months as well, describing this as a “negative development”. “It is clear to those on the outside that from a very early stage, the two operators were cannibalising each other,” Borg said, lamenting that there were even problems to get into Mgarr Harbour at certain times of the day as a result. “Now we have an opposite situation: two operators who have found an agreement on a schedule. We have gone from a situation of extreme competitiveness to one which is almost a monopoly, which is unacceptable because the service in this way is dictated by one body,” he said. Borg said that the operators are limiting their own operations and potential with the decisions they are taking, citing the fact that now that economic activity has reopened after the Covid-19 pandemic and cultural activities are being held in Gozo, the last trip is still leaving Mgarr at 8.15pm, which makes it impossible for anyone wishing to travel to the island for a night to do so. Borg added that government intervention through a Public Service Obligation for the operators to operate specific times which are not being served should be among the things considered, but stressed that it is difficult to analyse the service’s problems “if the operators are not doing their best to expand the service even now that the situation is coming back to normal”. He said that transparent discussions are needed, but stressed that one cannot say that the service is not sustainable when it worked well in a difficult period due to Covid-19 restrictions and now is being reduced when the same Covid-19 situation is almost back to normal. Students lament timetables, lack of bus connections to Cirkewwa On his part, Captain David Bugeja, who heads Transport Malta’s maritime directorate gave the committee a brief overview of how the service has operated in the past year since its introduction. Reacting to Borg’s intervention later in the sitting, he said that it is clear that the service needs to be regulated by either introducing a Public Service Obligation or a service agreement which establishes an agreed upon schedule and tariff if need be. He said that the operators had found a balance between them so that they can do the minimum work in order to maintain their respective services. The president of a student organization, which represents Gozitan students, meanwhile focused her critique on gaps in the fast ferry’s time schedule and on the lack of a direct bus route which Gozitan students can use to get to University. Estelle Scicluna told MPs how the fast ferry’s instable trip schedule and the fact that there is a gap in the service between 10am and 1pm is creating problems for students who need to travel between the two islands. These students, she said, are constrained to use the Gozo Channel service, but there are many Gozitan students who want to see the X300 route, which ran in-sync with the Gozo Channel service between Cirkewwa, the University of Malta, Junior College, and Valletta, return. The X300 route was introduced in September 2020 at a time when many post-secondary and tertiary students had all of their lectures on a remote basis. It was scrapped in June 2021 when the fast ferry service was introduced. Their only direct public transport option as things stand is the X1, which runs between Cirkewwa and the Malta International Airport, but Scicluna said that this sometimes suffers from punctuality problems and also tends to be full due to tourists using it. She said that she and her organisation had tried for months to get a meeting with the Transport Ministry and Transport Malta to bring these qualms up, but that no meeting had been forthcoming thus far. Representatives from the two fast ferry operators, from the Gozo Tourism Association, the Gozitan Workers’ Association and an official from Transport Malta who works on public transport will be summoned for the next sitting, which will take place on 27 June. The committee is chaired by PL MP Jo-Etienne Abela and made up of PN MPs Alex Borg and Claudette Buttigieg and PL MPs Clint Camilleri and Anton Refalo. PL MP Abigail Camilleri was deputising for Camilleri, who was not present at the meeting.