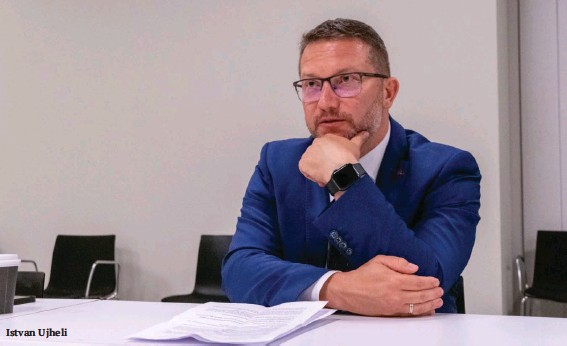 Malta should place more focus on event and culture-based tourism which can be attracted on a year-round basis, rather than focusing on mass tourism, a Hungarian MEP who works specifically in tourism told this newsroom in an interview. Istvan Ujheli, who hails from the Hungarian Socialist Party (MSZP), is the vice chairman of the European Parliament’s Committee on Transport and Tourism and was in Malta as part of the Mediterranean Tourism Forum, hosted by the Malta Hotels & Restaurants Association. Asked for his opinion about Malta’s tourism sector and the direction it should take, Ujheli warned that given that Malta is a small island, focusing exclusively on mass tourism can be dangerous because it could lead to over-crowding which both the tourists and the people who live in Malta will grow to dislike. He continued that it is important to have tourism across all 12 months of the year, something which can be achieved through tourism and cultural events being hosted between September and May. “Malta is more than capable of doing this,” Ujheli said. He said that he has met several talented and smart Maltese with innovative ideas who can build the industry. Ujheli also said that educational programmes are of great importance. He said that while he could not provide many details on the matter, he and other Maltese stakeholders are working with international organisations in order to establish new educational programmes in Malta for both locals and foreigners to work in the service industry. Asked about the recovery of the tourism sector from the Covid-19 pandemic, Ujheli said that one needs to realise what happened in the last decade: a financial crisis just over a decade ago where no support was afforded to the industry, followed by the collapse of Thomas Cook, which affected tens of thousands working in tourism, the Covid-19 pandemic and now the war in Ukraine. “We don’t have any kind of European crisis management mechanism. Nothing! This is one of my main proposals to the European institutions: that we need to have a concrete crisis management mechanism. Yes, the national government has the job to do something, but when we are in a global crisis, it is not enough to have national answers,” he said. Ujheli added that there is the need for a sustainable financial system for tourism in the European Union, noting that the sector was only recognised as its own industry by the EU for the first time this year, despite the fact that it employs 23 million people and makes up 10% of Europe’s GDP. Thirdly, education and skills are a massive part of the recovery from the pandemic, Ujheli said. “We know very well that because of Covid-19, a large part of the staff left the industry and now doesn’t want to go back because they fear its instability,” he noted. Asked whether it is time for travel restrictions related to the pandemic to be relaxed further, Ujheli noted how the night prior to this interview the EU had agreed that the EU digital certificate can be used for another year, adding that the certificate itself is a “revolution” from a technological standpoint. “We really need the full opening of the transportation sector for tourism in the next few months,” Ujheli however said. He said that there are rich tourists from third countries such as China, the United States and India who are itching to travel at all months of the year, but are still waiting for direction on travelling into Europe. Asked, finally, about how he understands the concept of sustainable tourism, a term which has become one of the latest buzzwords in the political sphere, Ujheli said that he really hopes that this will not simply be a passing “fashion”. He said that it is normal for such things to be spoken about with little concrete action, but said that this time it has to be different and the action has to be real and tangible. “If we have dreams without any concrete information to back it, it can be very dangerous,” he said, before adding that the European Green Deal has to factor this in. He added that when one speaks about sustainable tourism, one must also take into consideration how SMEs and family businesses can achieve it, because they do not have the money to finance many of the green solutions which other businesses can. He advocated for the creation of a European fund to support SMEs and small companies to be greener and more sustainable. Ujheli was in Malta as part of the Mediterranean Tourism Forum, which was hosted in Malta last week and which convened the best brains in tourism to map out the future of the industry.